Do you have the skills to make a difference as a trustee for The Brick? 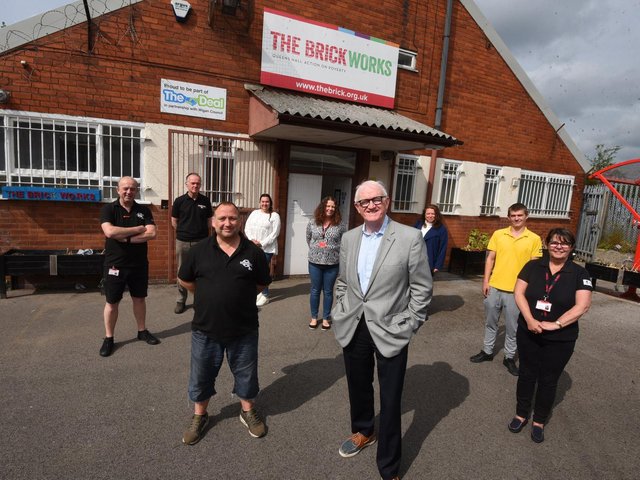 Do you have the skills to make a difference as a trustee for The Brick?

A charity supporting people across the borough facing homelessness, poverty and hunger is looking for caring volunteers to help make a difference.

The Brick is searching for trustees to join its board and help oversee the work being done by the charity’s staff and volunteers.

They play a vital role in how the organisation operates and help to steer its future, using their own personal and professional experience and skills to change lives.

Leading the trustees is chairman John Parker, who got involved with The Brick around 14 years ago in its very early stages.

He said: “At the moment there are six trustees and we have some oversight of the charity. I chair our meetings and speak to people. I have a close relationship with the directors, particularly the chief executive Louise Green.”

The charity’s directors write reports about their work for the trustees to consider at their meetings, so they can keep abreast of everything that is happening.

One of the key areas they consider is finances, working alongside the financial director to ensure The Brick can balance its books.

Mr Parker, 76, got involved with The Brick after retiring from his career as an industrial chemist and running a business for more than 20 years.

He was inspired by the charity’s Christian ethos and a desire to help others.

He said: “It’s a big passion for me, but it stemmed from me wanting to help others, particularly those who are struggling.”

Having decided to increase the number of trustees from six to eight, the charity is looking for people with skills that they can use to benefit The Brick.

Mr Parker, from Hindley Green, said: “We want people who are passionate about social justice and people who are struggling in life. I think it’s the passion to give people a chance at creating an environment where they can escape and there is somebody to help them.

“We are looking for people who have a certain experience, because we are growing we need to broaden our base of in-house knowledge. I have got some business experience, but it was in a specialist sector.”

Trustees must be able to commit to attending six meetings each year, but those with more time can get more involved, for example by attending the charity’s sites, meeting staff and volunteers, and taking part in events.

The newest volunteer to join The Brick’s board of trustees is Bill Ainscough, a successful businessman who now describes himself as a “social entrepreneur”.

After stepping back from business after 40 years, he now likes to use the skills he has to help charities. He was involved in setting up OnSide, which now has youth zones around the country, including in Wigan.

He said: “I had heard about The Brick and seen what they were doing. It’s about helping people get back into society, in a nutshell. They had all the apparatus there – they provide shelter, a food bank and various facilities. I thought what they probably need is some focus and to try and get the charity to be more self-sustaining.”

He says The Brick has been promoting its shops, for example, rather than relying purely on donations from the public.

Despite having funds to support the charities he is involved with, Mr Ainscough is keen to do more than just give money.

He said: “I have been in business for years and I wanted to give something back to society. I decided, ideally in the North West, young people and homeless people were the two groups I was interested in trying to help.

“What attracted me was instead of doing chequebook generosity – it’s very easy for me to write a cheque and give it to a charity and feel I have done my bit – I wanted to do more than that. I do donate money to these charities and help them where necessarity, but more than that I want to actually help them to organise themselves in an efficient way so that any money they do get is not lost or wasted.”

It has been an interesting first year in the role.

Mr Ainscough, who lives in Parbold, said: “It’s excellent. They are a good team of people. It was started by the Methodist church and it has roots there, but really what we are doing is trying to expand the service for people in the borough of Wigan so we require a more business-like approach really and that’s what I bring.

“I try my best to help things get along. The charity is in a good place now, they are on a decent financial footing, they do some council contracts, they have the charity shops running. There are a number of initiatives going forward to help raise money and so it’s in a good place with some good people.”

Mr Ainscough, 73, hopes other people with key skills will consider joining the charity.

He said: “What’s useful are people who can bring a skill that will help the charity. It could be someone with some legal skills, so maybe a solicitor, or somebody with financial skills like an accountant, or medical skills like a doctor, or people who have worked with the type of people we are dealing with. It’s someone who can bring added benefit to the charity through their experience. We have an open mind on it.”

To find out more or express an interest in becoming a trustee, email recruitment@thebrickorg.uk.

Happy Saturday! 😊🎉If you are replacing a piece of furniture this weekend please consider donating your preloved one to The Brick 🙏We are always looking for good quality sofas, small tables/chairs, wardrobes and white goods to support our families in Wigan and Leigh. 🪑🛋It's really easy to donate, just fill out the form here to arrange a collection🚚 > buff.ly/3D24RsuGive your preloved furniture a new home! Thank you for your support. ❤️#endfurniturepoverty #preloved #sustainable #reusereducerecycle #Saturday ... See MoreSee Less