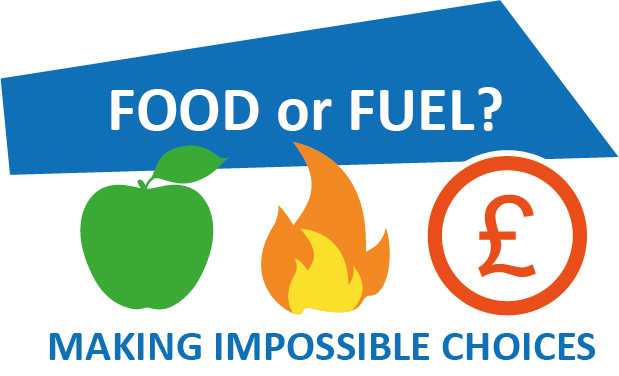 ‘My only splurge is buying new shoes for the kids’.

Tracey is mum to two lovely girls who are into everything! She has worked since leaving school and currently has a full time position in retail. She is a single parent because her husband died in a road traffic accident three years ago. She is also one of the 40% who are having to claim Universal Credit despite being in work.

In the past six months, every single one of Tracey’s household bills has increased. Now she has lost the £20 uplift to Universal Credit. So Tracey is faced with impossible choices every day: Food or heating? Rent or fuel? More hours at work to increase her income or some time with the kids before bedtime, before it all starts again tomorrow?

Stephen Timms MP, Chair of the Work and Pensions Committee, said: “The £20 cut will plunge hundreds of thousands, including children, into poverty… Benefit rates have not kept up with the rising cost of living… in real terms they will fall to their lowest in over thirty years.’

The Brick exists for people like Tracey. We are here not only to help, support or signpost families like hers, but also to be advocates of change and agents of social justice.

Tracey is doing the very best she can, but she can’t take on the whole system by herself. Reform is what is needed, and this is one of the charity’s key aims. It is not so much about us being a voice for the voiceless. It is more about us unstopping our ears so that we listen – really listen – to other people’s experiences and viewpoints. In doing this, we soon realise that it isn’t a level playing field and some people are at a distinct disadvantage however hard they try. This isn’t fair and it isn’t right and we cannot accept it. The Brick continues to believe that change is possible.

We are seeing an increasing number of working people asking for our help, people who previously donated food, are now facing the same struggles and insecurities and are even seeking help themselves. Every day we give out parcels without questioning.‘’How would you feel about having to ask for food?’’🤔Many hard-working families in Wigan are struggling to make ends meet. If you can spare £1, it will make a huge difference to families in our local communities this summer❤️☀️ To donate text BRICK followed by your amount eg. BRICK£1 or BRICK£2, BRICK£5 to 70480, or visit buff.ly/3tWxeVKThank you for your support, together we can tackle poverty ❤️#EndChildPoverty #EndPoverty #NoEmptyPlates #Sunday ... See MoreSee Less