From Criminalisation to Compassion: Have We Finally Scrapped the Act? 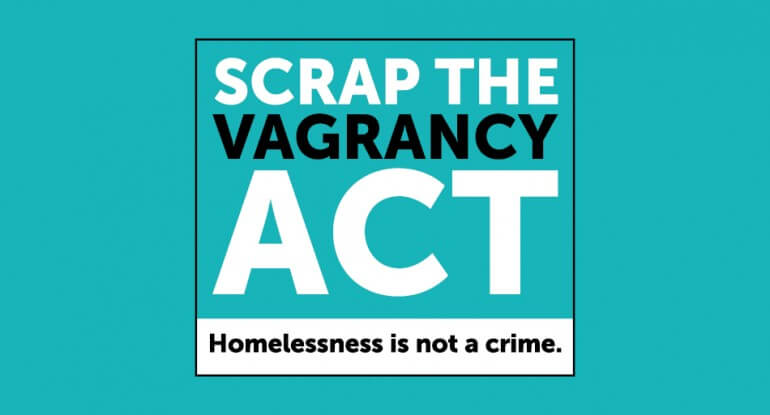 From Criminalisation to Compassion: Have We Finally Scrapped the Act?

The Vagrancy Act of 1824 was on course to reach its bi-centenary in 2024 because incredibly, it was still valid law until April 2022. Our Trustee, Clare Wood, takes a look at the legislation, its repeal and subsequent developments.

Background to the Act

The law was enacted under the reign of King George IV, formerly Prince Regent, due to concerns about an increasing number of ‘idle and disorderly persons, rogues and vagabonds, incorrigible rogues and other vagrants in England.’ There was a perceived fear amongst polite society about the unwelcome behaviour of Irish and Scottish migrants ‘wandering abroad’ in their country, in addition to former soldiers trying to elicit sympathy (and funds) by drawing attention to their injuries. Whilst the Napoleonic Wars had ended several years earlier in 1815, many were still destitute.

The Vagrancy Act clamped down on a whole host of activities deemed criminal such as being an unlicensed pedlar, behaving in a riotous or indecent manner, wilfully refusing to work when able, fortune telling, betting in the street, lodging in the open air, begging and gathering alms, husbands abandoning their wives and children, indecent exposure and possession of weapons or implements used to break into buildings. Persons charged could be searched and have their belongings taken, then if convicted they faced up to a year’s hard labour in a house of correction. If the criminal was a man, they could also be punished by whipping.

The number of so-called vagrants in prison doubled to almost 16,000 following implementation of the Act. The New Poor Law soon followed in 1834, and with it the infamous Victorian workhouses.

What was the recent position?

The number of prosecutions under the Act were relatively small because the vast majority of police interactions with homeless people are of an informal nature. Officers were perhaps tempted to refer to the Act (along with other potential offences) to coerce people to move on, where the individuals they came across were not strictly speaking guilty of either begging or rough sleeping at that time. There were far more cautions and arrests than formal prosecutions, as is typically the case with all crime.

Despite various amendments over the years and the applicable punishment being reduced to a fine, it still remained unlawful in this country to beg or sleep rough, unlike in Scotland for example. It is interesting to note that the highest conviction rates were in London, Merseyside and Greater Manchester.

Subsequent legislation introduced a wide range of powers for both police and local authorities to tackle persistent problems in our towns and cities, such as the Anti-Social Behaviour, Crime & Policing Act 2014. Begging – in and of itself – is not a criminal offence under this provision: it also has to cause alarm, harassment or distress.

There have been some notorious attempts to use the Act to smarten a place up. When Prince Harry was due to marry Meghan Markle in Windsor in 2018, the then leader of the local council wrote to Thames Valley Police asking them to clear the “epidemic of rough sleeping and vagrancy” from the town in advance of the royal celebrations. A local resident started an online petition in opposition which reached over 325,000 signatures and the Prime Minister was similarly critical. There were reports at the time of sleeping bags and other personal belongings being removed in the days leading up to the wedding.

In 2018, Crisis published its report Scrap the Act: The case for repealing the Vagrancy Act 1824. Students from Oxford University brought the issue to the attention of Liberal Democrat MP, Layla Moran, who supported the charity’s call to repeal the legislation in its entirety.

Crisis sought legal advice on the Act, with the law firm instructed being of the view that it was both obsolete and archaic. Other pieces of legislation provided a far more appropriate framework, but it was suggested that the government should take things even further and consider the opportunity to completely overhaul the law on homelessness ‘to reflect the wider social issues’. A multi-agency approach had to be preferable to relying on the police to deal with homelessness as an enforcement matter.

Following a vote in favour of repealing the Vagrancy Act in the House of Lords in January of this year, the government announced an amendment to the Police, Crime, Sentencing and Courts Bill. When exercising existing powers under the Anti-Social Behaviour, Crime and Policing Act 2014, the following principles are to be applied:

And arguably most important of all:

The Bill had a rather difficult journey to the statute books, given it was previously rejected in the House of Lords due to other controversial provisions it contained (such as restrictions on the right to protest). It received Royal Assent on 22nd April 2022 and with one short sentence at section 81:

Not quite, it would seem! The Department for Levelling Up, Housing & Communities ran a consultation, ending on 5th May 2022, to consider the following issues:

It has also introduced the Levelling-up and Regeneration Bill, which under an innocuous looking ‘miscellaneous’ section contains the following draft clause:

(b) section 4 of that Act (persons committing certain offences deemed to be rogues and vagabonds),

disregarding the repeal of that Act by the Police, Crime, Sentencing and Courts Act 2022.

(2) Regulations under subsection (1) may, in particular, include provision-

(b) about providing assistance to people who engage in conduct within subsection (1).

Unsurprisingly, campaign groups have been quick to criticise the government for what appears to be a U-turn in policy and an attempt to ignore the will of Parliament. Former Housing Secretary, Robert Jenrick, had previously concluded that no additional legislation was required, stating in the House of Commons:

“I’ve come to the conclusion that the police have, elsewhere in legislation, a range of powers to take action, there’s no shortage of laws for tackling anti-social behaviour, criminal damage, trespass. There is a wide range of legislation that’s available to police forces.”

A Public Bill Committee is due to report back in September 2022, following which the Bill will be further debated in the House of Commons and amendments proposed. Many MPs have voiced their scepticism about the government’s claim that the clause is merely a ‘placeholder’ until both the consultation results and Committee report have been considered.

Surely there is no place in 21st Century society for labelling people as vagrants, rogues and vagabonds? Given the Vagrancy Act has been superseded to such a significant degree, and when combined with the gradual sea change we have witnessed in attitudes towards the complex issue of homelessness, it should now be consigned to the history books for good and be required to ‘move on’ – permanently.

Can you make an omelette? If not would you like to learn?Omelettes are perfect for a quick and easy, healthy tea. What’s your favourite filling?Learn with Shirley on our omelette making drop in session next Wednesday 17th between 10am and 2 pm. No need to book just call in make your omelette and take it home. #learnwithshirley #wigan #community ... See MoreSee Less