Wigan Author Donates Royalties from his Latest Book to The Brick 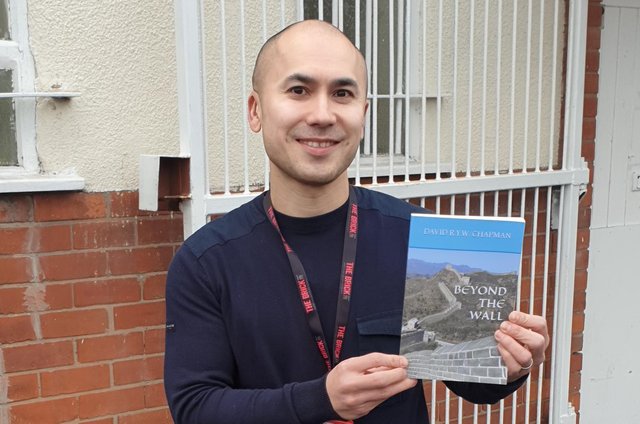 Wigan Author Donates Royalties from his Latest Book to The Brick

David Chapman, retail assistant at The Brick and author, has published his third book, ‘Beyond the Wall’, and all royalties are to be donated to The Brick.

David Chapman’s first book ‘The Adventures of an Introvert’, regularly tops a number of the Amazon Kindle charts, and with this latest offering, David is hoping that it achieves similar success, and to raise as much money as possible, for The Brick that, during the pandemic, has become a big part of David’s life.

David visited Asia in 2013, for his week-long trek of the Great Wall of China, which became the inspiration for his third book, ‘Beyond the Wall’. In this book David focusses on the people he meets, during his travels in China, and the other countries he subsequently visited, where he is struck by how the problems facing the people there, ties in with The Brick, in particular the issues of homelessness, and the general unfairness of life’s circumstances. This led to David’s decision to donate all the royalties from the sales of the book to The Brick.

David became disenchanted with the more mundane office jobs, where he had been working for 10 years, since leaving University. When he was made redundant from his job, during the pandemic, David took the opportunity to do something worth while and began volunteering for The Brick in 2020, within the charity’s foodbank.

Just 4 months later, David was offered a paid position, working in The Brick’s charity shop as a part-time retail assistant.

David Chapman said: “My books are all about travelling from a different perspective. People are often used to seeing confident travellers, but I wanted to tell an alternative story, and to share my passion for travelling from my own perspective, as someone who is a self-confessed introvert, shy, and wary of social interaction.”

Keely Dalfen, Finance and Commercial Director, at The Brick, said: “At The Brick we are always so grateful for the help we receive from people in our community, and how David is donating all the proceeds from his latest book, is so generous. David really has become part of the family here at The Brick, first as a volunteer and now as an employed member of the team. From everyone at The Brick we want to thank David, for his generosity and his continued support.”

David concludes: “If anyone else wants to help our community, I would encourage people to volunteer for The Brick, as it really is a satisfying and fun way to help the community, and to get yourself out of your comfort zone. My next book is about the history of The Brick, and will include stories of the people working here, and of those who The Brick has helped over the years. I’m hoping to have this finished by next year, so watch this space!”

You can purchase David’s book, ‘Beyond The Wall’, from Amazon for £6.99 as a paperback or for £1.99 as an E-book, here: Beyond the Wall – David Chapman  or you can find out more about David and his travels at https://theadventuresofanintrovert.com/ or follow David on Facebook or Instagram by searching for The Adventures of an Introvert.

See the person not the problem #seeme ... See MoreSee Less